Boston’s South End is full of historic brownstones with walls that could tell amazing tales. Our own bed and breakfast finds its home in a brownstone from the late 1800’s on a street lined with wrought iron gates and cobblestone sidewalks. Can’t get enough of old time Boston? Head to the Boston Commons and wander through the maze of famous gravesites inside the Granary Burial Ground!

The Granary Burying Ground was once part of the Common’s itself. The Park Street Church was built where the old grain house once stood, separating the cemetary from the rest of the park. A beautiful iron gate now encloses the site and visitors can explore and decipher the grave markers to find many historic figures like John Hancock, Samuel Adams, Paul Revere and the victims of the Boston Massacre. Paul Revere is one of the most famous Bostonians. His historic midnight ride during the Revolutionary War is told countless times to children of all ages learning the history of our independance. Revere was employed as a messenger in 1774 and 1775. On one fateful night, he was instructed to warn commrades Samuel Adams and John Hancock if the British were to come by land or sea. Revere rode from Charlestown to Lexington, warning every house along the way of the impending arrival of the dreaded Red Coats. Later that evening, Revere was joined by two more riders, William Dawes and Samuel Prescott. All three were captured by the British in Concord, MA where the Sons of Liberty were holding guns and munition. All three eventually escaped and were able to help their fellow soldiers at the battle on the Lexington Green. These historic figures and many others lay at rest in the Granary Burial Ground and can be visited all year round. 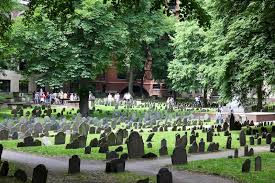 After a day at the Commons and getting acqainted with some of our founding fathers, head back to the South End and have a cup of tea with your innkeepers at our bed and breakfast. Share your new found education. Continue your day of exploration and discovery by taking a stroll down Tremont Street, also known as Restaurant Row, and enjoy a delicious meal at one of the neighborhood’s many eateries.